I just did an experiment feeding Audio-TC into my Tascam dr701d while formally jamming LTC from a BNC. Because folks do get laxed with these terms, I do mean jamming and then pulling the cable out for free run while recording uninterrupted audio. I let my recorder run for over 9 hours while it auto created 3 files, and then compared the file-TC with the recording.

It appears as though I am off by around a minute and 25 seconds by the 3rd file. Which is not very good performance for the Tascam dr-701d. You’d do much better with the new temperature infused crystal on the zoom F4 whereby folks are reporting drift in just a couple miliseconds at this scale all while remaining on the same video frame.

But here’s the thing, I figured the tentacle sync remembered my settings from the previous set-up, so I didn’t fix the frame rate. And I don’t think the tascam clock is conscious of frame rate; how could it be? I’ve brought the audio files into Tentacle Sync Studio, and that’s where I indicated the readings on the discrepancy between the Time Code sources. But the problem is that I don’t know if the File-TC has conformed to the Audio. It’s in yellow.

Is there any way to tell Tentacle Sync Studio in hindsight that I was using 29.97 fps ndf and have it recalibrate the difference? Maybe the performance on the Tascam would prove better. Or does the yellow dot on the File-TC indicate something other than what I’ve understood? 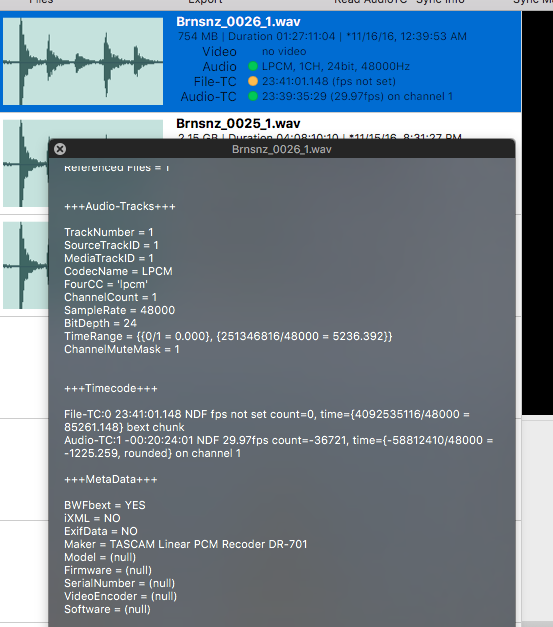